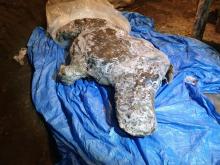 A well-preserved Ice Age woolly rhino with many of its internal organs still intact has been recovered from permafrost in Russia's extreme north.

Russian media reported on Dec. 30 that the carcass was revealed by melting permafrost in Yakutia in August. Scientists are waiting for ice roads in the Arctic region to become passable to deliver it to a lab for studies next month.

Fifteen people were killed and another 13 missing after an illegally built dam collapsed at a gold mine in a remote Siberian settlement on Oct. 19, in the latest deadly accident to hit Russia.

Eco-activists say nearly irreparable damage to the nature has been done in the region of Siberia.

The huge fires that swept the Siberian forests were deliberately ignited. This was stated by the Russian prosecutor's office.

Investigators say the fire, which covered two and a half million hectares, was lit to cover up illegal logging.

Turkish and Russian scientists are studying the prehistoric period of Siberia through joint excavations.

The four words are believed to be in the Orkhon-Yenisei type script.

A worker checks the valve of an oil pipe at the Lukoil company owned Imilorskoye oil field outside the West Siberian city of Kogalym, Russia, January 25, 2016. REUTERS/Sergei Karpukhin/File Photo

Thousands of angry and distraught Russians rallied on March 27 in a Siberian city to demand a full probe into a shopping mall fire that killed at least 64 people, 41 of them children.

At least 53 people were killed by a fire in a shopping mall in the Siberian city of Kemerovo, Russia's Emergency Situations Ministry said on March 26.

Teenager attacked today with an axe and Molotov cocktail his classmates in a Siberian school and injured at least seven people, local authorities said on Friday, quoted by the France press.

The new electronic thermometer in the Siberian village of Oymyakon, recognized as the coldest village in the world, was damaged yesterday when the temperature dropped to minus 62 degrees Celsius.

Local residents say the temperature has fallen even further - down to minus 71.2 degrees. It was not so cold in Oymyakon since 1933 when it was minus 61 degrees.