Romania's national airline Tarom has used a Boeing 737-800 aircraft for a humanitarian flight to Vietnam from Bucharest via Dubai and Saigon, to fly 199,200 COVID-19 vaccine doses donated by Romania. The flight took place on August 23.

Direct weekly flights between Albania and Bulgaria are starting as of 1 August. By 28 August an assessment will be made whether the lines can be maintained all the year round, including towards other destinations.

Turkish Airlines on May 20 marked the 88th anniversary of its foundation.

Turkey's flag carrier started operating with a fleet of five aircraft and a seating capacity of 23 in 1933, according to a company statement.

Now the company flies to 127 countries with a modern fleet of 365 aircraft, it said.

Turkish Airlines will resume some international flights this month to China, South Korea and the United States among other destinations, the airline said on June 12, a day after it began restarting such services.

TAROM Romanian Air Transport Company introduces on Monday, June 8, flights from Bucharest to London and back, according to an announcement posted on its Facebook page.

Romanian air transport company TAROM introduces on Tuesday flights from Bucharest to Rome and Milan and back, according to an announcement on its Facebook page.

KLM is expected to resume flights from Amsterdam to Greece on June 6, according to an announcement on Tuesday.

The Dutch airline said that the initial plan is for five flights a week to Athens International Airport from Amsterdam's Schiphol Airport in the context of a gradual restoration of the airline's European network, which includes Greece. 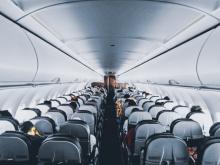 The imposition of social-distancing measures on commercial flights would mean an end to "cheap travel", according to IATA director general Alexandre de Juniac.

Twelve European Union governments urged the EU executive on Wednesday to suspend rules forcing cash-drained airlines to offer full refunds for cancelled flights instead of vouchers for future travel because of the Covid-19 pandemic.