Ljubljana – The Modern Centre Party (SMC) council decided late on Wednesday not to endorse Pensioners’ Party (DeSUS) leader Karl Erjavec as candidate for prime minister-designate. The SMC remains open for dialogue and cooperation with all parliamentary parties “in light of constant one-sided provocations” by the ruling Democrats (SDS), the party said.

Ljubljana – The National Assembly decided in a 50:16 vote on Wednesday that the latest corona crisis stimulus package, passed late last night, cannot be put to a referendum. The decision means that the law was published in the Official Gazette Wednesday evening and will take effect on Thursday.

Ljubljana – The opposition Social Democrats (SD) leadership endorsed on Tuesday Karl Erjavec, the leader of the Pensioners’ Party (DeSUS), as a candidate for prime minister-designate. The SD also backed the formation of an alternative government and filing a constructive motion of no confidence in the government.

Ljubljana – Karl Erjavec, who is slated for a candidate for prime minister-designate by the informal KUL coalition, said on Monday after meeting KUL representatives that “it is clear that we also need support by the SMC party if we want a new government”. Talks with the coalition party are thus in store.

Ljubljana – After meeting representatives of the informal KUL coalition on Tuesday, Pensioners’ Party (DeSUS) leader Karl Erjavec announced that a motion for a constructive vote of no-confidence in the government would be filed next week or by the end of the year. He expects that the required 46 MP votes will have been secured by then.

Ljubljana – The council of the Pensioners’ Party (DeSUS) voted in favour of a proposal by the party’s executive committee that DeSUS leave the current coalition and back party leader Karl Erjavec as a candidate for prime minister-designate.

The decision on the fate of the government ministers who are members of DeSUS is on Prime Minister Janez Janša, Erjavec said. 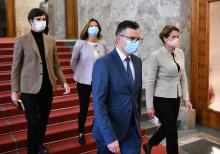 Ljubljana – The top bodies of the Pensioners’ Party (DeSUS) will meet on Thursday to discuss whether or not the party should leave the coalition, party leader Karl Erjavec said on Tuesday, noting that there was pressure from the rank-and-file, dissatisfied with the government’s work.

Ljubljana – The four centre-left opposition parties have filed a motion to declare an environmental and climate emergency after a similar attempt made in February failed to make it past the committee stage.