Mera25 MPs will give up half of their salaries to three hospitals in Athens, Thessaloniki and Crete, for as long as the lockdown continues, the anti-austerity party has announced.
Mera25 has nine deputies in the 300-seat Parliament.

The government has said it will expand its stimulus package to more sectors of the economy battered by the state-decreed suspension of the activity of businesses to halt the spread of the Ccoronavirus.

Angry demonstrations broke out in Mexico City on Feb. 14 as hundreds of women protested the gruesome slaying and mutilation of a young woman, a case that has come to personify outrage over the rising incidence of gender-related killings, or femicides.

Bolivia's interim government led by Jeanine Anez announced on Jan. 8 it will launch investigations against nearly 600 former officials in the ousted administration.

Mexico's government said Bolivian police had impeded the departure of Spanish officials visiting the Mexican ambassador in La Paz on Dec. 27, widening a spat over Bolivia's surveillance of its diplomatic facilities that has rumbled on for days.

Bolivian prosecutors issued an arrest warrant on Dec. 18 for ousted President Evo Morales on charges of sedition and terrorism. 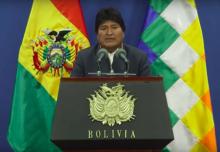 The Prosecutor General's Office of Bolivia has issued an arrest warrant against the former exiled president Evo Morales after the provisional government's accusations of incitement and terrorism.

Prosecutors in La Paz have signed an order for the police to detain the 60-year-old politician and bring him to the Attorney General's office.

In an apparent turnaround from its original position, the MeRA25 party of former leftist finance minister Yanis Varoufakis said it will oppose the government's planned bill granting full voting rights to diaspora Greeks, describing it as an attempt to "deceive" diaspora Greeks and to "violate" their voting rights.

Half-hearted talk about the need for there to be self-criticism within Syriza is rampant, but it seems that it will be difficult to launch a substantial dialogue about how that government led the country to third, painful bailout memorandum.

Prime Minister Kyriakos Mitsotakis on Friday achieved consensus with some party leaders on his government's plan to grant Greeks living abroad full voting rights but not with the leader of the main leftist opposition Alexis Tsipras, who rejected the basis of the initiative, which is the equality of each vote.