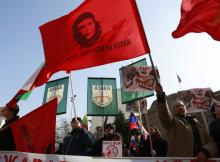 About a hundred people have demonstrated against Bulgaria's NATO membership, calling on the alliance "to leave" the country.

The event started at Sunday noon at the square in front of Bulgaria's Presidency and later headed to the National Assembly.

BELGRADE - The Belgrade City Council adopted and forwarded to the City Assembly the proposal to declare prominent Norwegian politician Thorvald Stoltenberg an honorary citizen of the Serbian capital.

The initiative was launched by President of the Belgrade Fund for Political Excellence Sonja Licht, the city's press service said in a release on Thursday.

MUNICH - Serbian Prime Minister Aleksandar Vucic met with NATO Secretary General Jens Stoltenberg on the sidelines of the Security Conference in Munich, and said that Serbia maintains good relations with NATO through the participation in the program 'Partnership for Peace'. 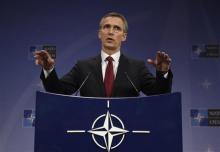 NATO was set Feb. 5 to agree a major boost to its defences including six bases in eastern Europe and a spearhead force of 5,000 troops in response to what it called Russian aggression in Ukraine.

The Minister of National Defence stated the following:


The Alliance's secretary general reinforces the message of the benefits of military collaboration.

NATO head Jens Stoltenberg urged the alliance Friday to brace for further challenges after a "black year" of Russian intervention in Ukraine and terror attacks on Europe's streets.

The Greek armed forces will observe three days of mourning following the death on Monday of two Hellenic Air Force pilots whose F-16 fighter jet crashed during NATO-led exercises in southeastern Spain, killing another eight personnel and injuring at least 13.

PRISTINA - NATO Secretary General Jens Stoltenberg said Friday that he saw progress in the security and political situation in Kosovo but still much remained to be done. 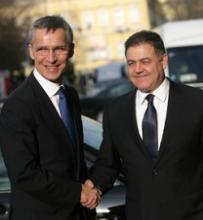 Bulgaria is strongly concerned by the instability in the Middle East and tensions in the Black Sea region and is doing its best to cope with the influx of refugees which could increase, Defence Minister Nikolay Nenchev said on Thursday following talks with NATO Secretary General Jens Stoltenberg in Sofia.