Subdivisions of Bosnia and Herzegovina

"The Supreme Court of Republika Srpska has issued a verdict in the case of Milenko Gojgolovic, confirming the decision of the District Court in East Sarajevo," the court told BIRN.

BIRN's reporter followed the participants all the way along the route of this year's Peace March, and posted regular updates, photos, videos and other content on Facebook, Instagram and Twitter as the march progressed.

Begajeta Mujic, a Bosniak civilian, told Belgrade Higher Court on Monday that female prisoners held at the Sase mine prison camp in the Srebrenica municipality by Bosnian Serb forces in 1992 were taken out and raped.

Former Bosnian Serb soldier Novak Stjepanovic is on trial for raping a young Bosnian female at a house in Bratunac in early June 1992.

The state court in Sarajevo on Tuesday confirmed a revised indictment charging Dane Bajic and Mijodrag Knezevic with committing a crime against humanity committed in the municipality of Prijedor in 1992.

A year after an investigation was opened into the disclosure by several media outlets of the identity of a protected witness in the trial of five ex-policemen accused of involvement in the Srebrenica genocide, the prosecution has not announced any progress in the case.

This is the conclusion of the Independent International Commission for the Study of the Suffering of All Nations in the Srebrenica Region in the period 1992-1995, formed by the Government of Republika Srpska.

The Bosnian state court on Monday ordered Milomir Savcic, the wartime commander of the 65th Protective Motorised Regiment of the Bosnian Serb Army's Main Headquarters, to be remanded in custody for breaching a court order prohibiting him from speaking publicly about issues related to the charges against him, his lawyer told BIRN. 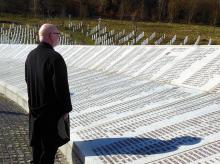 The commission was led by Israeli historian Gideon Greif.
The 1.036-page report, as well as the conclusions, were published in Serbian and English.