The process of appointing new presidents of the country's top courts began on Thursday with Justice Minister Konstantinos Tsiaras presenting the cabinet with a list of proposed candidates for the Supreme Court and the Council of State.

This morning there was a unanimous judgement in the Ayodhya case, when a 5- Judge Bench headed by the Chief Justice Gogoi delivered its verdict.  Other judges on the bench were Justice Bobde, Justice Bhushan, Justice Nazeer and Justice Chandrachud. 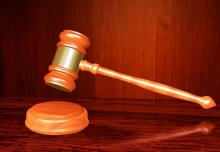 The decision of the British Prime Minister Boris Johnson to suspend Parliament for 5 weeks is illegal, the Supreme Court of the UK has ruled.

Magistrates initially stated that the decision fell within their jurisdiction, thereby rebutting a previous ruling by the English Supreme Court, which ruled that suspending Parliament's work was not a court's prerogative.

Iosif Tsalaganidis has been appointed president of Greece's Supreme Court, it was announced Wednesday. He previously served as court vice-president.

There are certain posts in public service that operate almost anonymously for the majority of the population because the institution transcends the individual that serves it.

Such was the case with the Supreme Court Prosecutor's Office.

Straight on the heels of Justice Minister Michalis Kalogirou's order yesterday that a disciplinary probe be launched against him, former Deputy Supreme Court Prosecutor Ioannis Angelis (who was supervisor of the corruption prosecutors handling the Novartis probe) has sent an open letter to the press outlining a long string of procedural violations and allegations that there were targeted prosec

The judiciary and the government are poised to pick the new Supreme Court Chief Justice and Prosecutor after the terms of Vasileios Peppas and Xeni Dimitriou, respectively, end on 30 June, at the end of the judicial year.