Remzi Shala's lawyer, Natal Bullakaj, told BIRN on Thursday that the Supreme Court has upheld the former guerrilla commander's appeal against his war crime conviction and sent the case for a retrial.

The retrial will be held at Prizren Basic Court, where Shala was originally sentenced in July last year to 14 years in prison.

The court in Prizren on Wednesday sentenced Remzi Shala, a former Kosovo Liberation Army, KLA unit commander known during wartime as 'The Red Apple', to 14 years in prison for committing a war crime.

Shala was convicted of the kidnapping of Haxhi Perteshi from Duhel, a village in the Suhareka/Suva Reka area in 1998. Days after he was seized, Perteshi was found dead.

Fugitive former Kosovo Liberation Army unit commander Remzi Shala, known during wartime as 'The Red Apple', appeared in court in Prizren on Friday after being arrested, but denied he was trying to evade justice.

Shala is a suspect in the kidnapping in 1998 of an ethnic Albanian man who was subsequently killed, and was initially supposed to appear in court in Prizren on January 9.

The extraordinary parliamentary session was called by the opposition Democratic League of Kosovo, LDK, whose leader in parliament, Avdullah Hoti, proposed the motion.

Shala told Pristina-based Klan Kosova TV that he has been invited as a witness and will travel to The Hague on April 17.

Asked why the prosecutors want to interview him, he responded: "I have no idea."

"Today I received the invitation letter and the order to appear before the high prosecutor of the Specialist Prosecutor's Office in The Hague, on March 12, 2019," Kuci wrote in a statement sent to local media on Thursday.

He added that he will "fulfil the obligation and will respond to this order".

The newspaper said on Monday that Limaj was a member of a group ten defendant acquitted of charges of crimes against civilians and members of the Serbian (Yugoslav) Army and (Serbian) police in the village of Klecka near Suva Reka in 1998.

Dozens of people were killed and massacred there, their bodies thrown into a lime pit to cover up the crime.

Radio Gorazdevac and website KoSSev reported this on Monday afternoon.

The reports said that "a group of Albanians, previously dispersed by the Kosovo police, came back and surrendered the displaced Serbs, who managed to reach the Church of the Holy Trinity - although Albanians had been blocking their way since the morning."

Bogdan Mitrovic, 74, was arrested in Musutiste in the Kosovo municipality of Suva Reka on August 28 after being taken out of a group of displaced Serbs who had come to see their houses and a razed Orthodox church in the village. 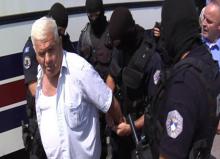 74-year-old Bogdan Mitrovic was arrested in the village of Musutiste in the Kosovo municipality of Suva Reka on August 28 , after he was taken from a group of displaced Serbs who had come to see their houses and a razed Serbian Orthodox church in the village.