A lot has been said about Manolis Glezos, the proud Greek who was the first to publicly stand up to the Nazis and humiliate Hitler by taking down the swastika flag from the Acropolis.

Two former lawmakers of the neo-Nazi Golden Dawn denied on Thursday that they or the party had any links to Nazism or hate speech.
The two men, Artemis Matthaiopoulos and Dimitris Koukoutsis, testified in the ongoing trial of Golden Dawn's party leaders, who are accused of running a criminal organization.

Suspected supporters of the neo-fascist Golden Dawn party desecrated the Muslim cemetery of Alexandroupoli in northern Greece, local media reported Tuesday.
The vandals spray-painted the cemetery with nationalist graffiti and the party's swastika-like emble, while scattering fliers saying "Greece belongs to the Greeks."

Unknown assailants spray-painted a black Swastika on the Holocaust Memorial on the northern port city of Thessaloniki's Eleftherias Square late on Friday or in the early hours of Saturday.

Police in the Greek capital on Tuesday remanded three suspected neo-Nazis who were trying to hang two swastika flags at the historic Athens Polytechnic building.

According to police, the suspects were trying to attach the flags to the entrance of the university where a student uprising in 1973 helped bring down the 1967-1974 military dictatorship.

Some of the neo-Nazi symbols uncovered by the newspaper were apparently painted on the walls of the city buildings in 2015 or perhaps even earlier, with authorities for some reason apparently doing little to get rid of this graffiti.

Sure, the fascists who punched and kicked Yiannis Boutaris while he was down had nothing to do with the Pontic Greek movement, nothing to do with Thessaloniki or northern Greece. They were aliens from another planet who landed in the northern port city on Saturday. 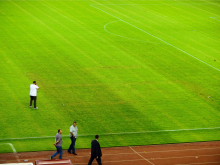 A court in the Croatian city of Split fined the Football Federation and its director for not properly inspecting a pitch on which a swastika had been imprinted before an international match in 2015.

The five people arrested in a crackdown by counterterrorism police on Tuesday are believed to be members of the "sister" groups Combat 18 Hellas and Unaligned Meander Nationalists suspected to be behind more than 30 attacks, chiefly targeting anarchist squats and Jewish memorials. 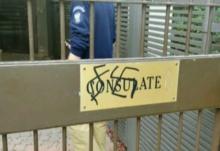 Swastika was painted at the door of the Polish embassy in Israel, BNT reported. Earlier, Polish Prime Minister Mateusz Morawieckisaid that Jews also took part in the Holocaust.