In 2019, 87% of people aged 16-74 in the European Union (EU) reported they had used the internet during the previous three months. This share ranged from 98% in Sweden to 68% in Bulgaria, Eurostat data showed. 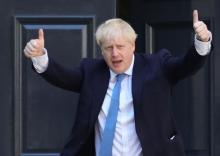 British Prime Minister Boris Johnson said on Monday he would make a decision on Huawei's role in 5G networks that would give consumers the benefits of the new technology without compromising national security.

Amid complaints that Serbia is importing too many ancient, high-polluting cars, the government is reportedly considering banning the further import of so-called Euro 3 cars - passenger vehicles that meet the EU emissions standards set for 2000 to 2005.

One of the government's goals is to increase flexibility among the European funds, from 5 percent to 15 percent so as to be able to allocate the money to Romania's priorities from other programmes, on Wednesday said Prime Minister Ludovic Orban at a briefing at the Victoria Palace. "I said that they [the European funds for the transport infrastructure, ed.

EU countries can restrict or exclude high-risk 5G providers from core parts of their telecoms network infrastructure under new guidelines to be issued by the European Commission next week, people familiar with the matter said on Wednesday.

Unknown assailants blew up a bank branch ATM early Monday morning in the area of Lykovrysi, northern Athens.
Police said the heist occurred at 3.25 a.m. on Sofoklis Venizelou Avenue.
The perpetrators used dynamite to blow up the cash machine and made off with an undisclosed amount of money.
It was the fourth time that the ATM in question had been targeted in recent years.

"It is an honor for me to be a winner of the Global Visionary Award for Women in Business Central USA-Central Europe.

The Greek government is waiting for the European Commission to publish its report on the development of fifth-generation cell telephony (5G) networks before deciding on a provider, Digital Governance Minister Kyriakos Pierakakis said on Thursday.

Sources from the Bulgarian Ministry of Defense have reported that a tender for the delivery of drones for the army was announced in the last days of 2019. The value of the contract would be about 13 million euros. Invitation for participation in the contest has been sent to 24 companies from the USA, Israel, Italy, Bulgaria and other countries, BNR reported.

Samsung's lab has introduced a digital avatar described as an AI-powered "artificial human," claiming it is able to "converse and sympathize" like real people, livemint reported.