Medvedev defeated Stefanos Tsitsipas and scheduled a clash with Rafael Nadal.
Medvedev had an outburst of rage between the second and third sets, when he attacked the umpire for not warning Stefanos' father about coaching.

He will play against Medvedev in the semi-finals

First, the local "Tennis World" from that city reported that in addition to Djokovic, eight other tennis players from the top 20 will perform.
These writings have now been confirmed after the official list of participants was published. 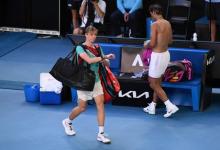 The Canadian lost this duel after five sets, and during and after the match, he criticized the umpire Carlos Bernardes.
Shapovalov thought that the umpire should not have allowed Nadal to take so many breaks during the match, and that in addition to medical time-outs, during the same break, he was unfairly allowed to go to the toilet, as he did between the last two sets.

She shared a video on her Twitter account which indicates, as she pointed out, "the other side of the story".
"The other side people need to see...", Chris Evert wrote.

In his interview in the show "Cube", hosted by Mats Wilander, the American once again referred to the unpleasant case of the deportation of the world's number one, Novak Djokovic.

ATP explained that the reason for that lies in the fact that the first Grand Slam of the season last year was played later and that it ended on that date.
Therefore, this year's points will be calculated on February 21, 2022.