Thai King Maha Vajiralongkorn on Saturday completed Buddhist and Brahmin rituals to symbolically transform him into a living god as the Southeast Asian nation crowned its first monarch in nearly seven decades.

Just days before his official coronation, Thailand's King Maha Vajiralongkorn on May 1married the deputy head of his personal guard force and gave her the title Queen Suthida. 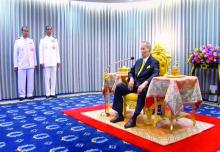 A Thai faces prison after being charged with lese majesty for insulting the king's dog, his lawyer said on Dec. 15, in an escalation of the already draconian royal defamation law.

Thanakorn Siripaiboon, 27, has been charged by police with lese majesty for a "satirical" Facebook post about the king and his dog, lawyer Pawinee Chumsri told AFP.