A mural marking the deportation of Thessaloniki's Jews to Nazi death camps during World War II has been defaced for a second time, the community group that commissioned it said.

The real estate market in Greece is at the center of European and global investment interest, according to participants in the annual Prodexpo conference in Athens that took place on October 24 and 25.

Thessaloniki has also developed its own pastry culture 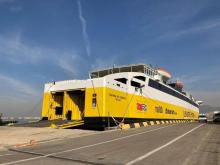 Despite the growing tensions between Greece and Türkiye, the ports of Thessaloniki and İzmir were connected by ferry as of Oct. 12.

The maiden voyage was set from Thessaloniki to İzmir with "Smyrna di Levante," a vessel that is 160 meters in length and 23 meters in width and is owned by the Greek-based shipping company, Levante Ferries.

Ferry services between Türkiye's Aegean province of İzmir and the northern Greek city of Thessaloniki, a project on the table since 2011, will begin in September, a Greece-based ferry company has announced.

Athens-based company Levanta Ferries declared that a ferry named "Smyrna di Levante" would hold service once a week between the two sides of the Aegean.

More than 250,000 Greek and foreign visitors, from 2012 until today, have chosen the open-type red buses of Thessaloniki Sightseeing to get to know the city and its numerous monuments, museums and churches, in just… 80 minutes.

A new regular container train service between Thessaloniki and Nis in Serbia has been launched by the Thessaloniki Port Authority-OLTH SA.