The Democritus University of Thrace in northeastern Greece is seeking to build new, ecologically friendly student dorms and research facilities that will contribute to reducing the carbon footprint of its campuses in the towns of Alexandroupoli, Komotini and Xanthi.

Inspired by the popular board game Monopoly, Greek designers created Constantinopoly, where players buy plots in Constantinople using Byzantine and Ottoman coins to build the city's famous monuments, while historical events such as the city's fall in 1453 influence the development of the game. The board game aims to spread knowledge of Greek culture and history in an innovative way.

An elected Muslim religious leader in Greece's Western Thrace region was given 80 days of prison sentence for usurping authority.

Turkey on June 21 decried a decision by Greece that local religious leaders, known as muftis, among the Turkish minority living in the Western Thrace would henceforth be appointed by the state instead of being elected by the local people. 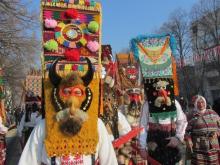 Scary giant kuker masks under the Largo dome in Sofia have become a photo attraction for city residents and guests. They are a trademark of the Yambol International Masquerade Festival Kukerlandia, which this year celebrates its 20th anniversary, the Municipality of Yambol said.

Masked revelers in colorful hand-made costumes thronged the streets of Pernik in Bulgaria on Sunday, warding off evil spirits and celebrating the beginning of spring with hopes for good health and a good harvest, reports Reuters.

Istanbul and the region of Thrace in Turkey’s northwest were hit by heavy snowfall and strong wind on Jan. 3.

Following a controversial decision, Athens is likely to take steps to preserve the balance between Turkish and Greek language lessons in the curriculum of Muslim religious schools in Western Thrace, according to an expert on minority affairs in Greece.

The government has submitted legislation to Parliament that will oblige the early retirement of two government-appointed muftis in the Greek border region of Western Thrace.