Schools are spraying kids with water and nursing homes are equipping the elderly with hydration sensors as France battles a record-setting heat wave baking much of Europe.

A heat wave springing from North Africa has hit Turkey, bringing the average temperatures to the extreme levels.

Madrid. Three men have died from heatstroke in Spain as Europe sweltered in a record heatwave Friday, with temperatures hitting a scorching 45 degrees Celsius (113 Fahrenheit) in some areas and meteorologists saying only scant relief is in sight in the coming days, reported AFP>

Here is a roundup: 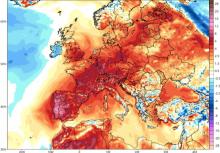 A building heat wave in Portugal and Spain threatens to topple national and all-time high temperature records in a continuation of a series of remarkable heat waves that have roasted the Northern Hemisphere this summer.

AN EXTREME heatwave that has hit in Japan has led to temperatures as high as 40C, with the casualties climbing up as more deaths were reported.

The Japan Times reports that more than 10,000 people had been taken to hospital due to heat stroke related symptoms.

The death toll had climbed to 30, after 10 more deaths were reported on Thursday.

A grueling heat wave caused at least eight deaths across Japan since Saturday, and the dangerous conditions are not forecast to subside through the duration of the week.

More than 2,000 people were treated at hospitals across southern and central Japan from Saturday into Sunday, according to The Japan Times.

Thirty-three people have died in a heat wave that has baked the southern part of the Canadian province of Quebec, officials say.

The death toll has climbed every day this week, with most of the victims between the ages of 50 to 80.

European cities in the second half of the century may face significantly worse heat waves, deepening drought, and more river floods if global temperatures continue to rise - something they need to begin preparing for now, researchers said on Feb. 21.

Last month was the hottest July since 1880, according to Greek official records, with NASA data indicating that, on a global level, July was one of the hottest months on record.

A heat wave that has gripped the country for the past week is expected to start easing Saturday with storms forecast for northern parts over the weekend, according to the National Meteorological Service (EMY).