Barkatshah, a refugee in Greece, worked as a US military interpreter in Afghanistan. Forced to flee after the Taliban threatened to kill him, he was refused refuge by the United States. He told AJ+:

“The Taliban warned me like, hey, ‘Quit the job with the infidels or we’re going to cut your head off.” 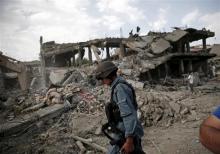 Fifteen more fatalities were confirmed Saturday from a barrage of bombings in Kabul, taking the toll to 51 in the deadliest day in the Afghan capital since the NATO combat mission ended in December.

The Taliban on July 30 distanced itself from peace talks that had been expected this week with the Afghan government, while making no comment on Kabul's reported death of their leader Mullah Omar.

The Afghan government is investigating reports of the death of Taliban supremo Mullah Omar, a presidential spokesman said on July 29, amid frenzied speculation about the rumoured demise of the reclusive warrior-cleric.

Taliban militants attacked Afghan Parliament on Monday by detonating explosives and firing rockets while lawmakers inside were about to vote on the new defense minister.

Lawmakers were evacuated unharmed from the building as attackers entered the main building in Kabul.

A loud explosion rocked the Afghan parliament and shattered windows on June 22 as members were in session and gunfire was heard shortly afterwards.

Television was broadcasting live from the building in the west of the capital, Kabul, when the explosion struck and lawmakers were seen leaving the building.

For those who still have doubts about authoritarianism in Turkey, I strongly recommend they read the recent academic work by the Republican People?s Party (CHP) called ?The authoritarianization of the regime and the Justice and Development Party [AKP] rule.?

The Afghan Taliban announced the start of its annual spring offensive on April 22, warning it would ramp up attacks on foreign embassies and government officials as well as military targets.

"If the foreign occupiers really want to relieve themselves from this nuisance of fighting, they should immediately withdraw," the Taliban said in a statement.

Afghanistan is turning its back on female activists and leaving them vulnerable to threats, assassinations and sexual assault, Amnesty International said April 7, urging the international community to preserve hard-won gains for women.