At least one person has been killed in a suicide attack on a car of Turkey's embassy in Kabul, the BBC reported on Thursday.

The Taliban have claimed responsibility for the bombing in a message to reporters.

I have been writing in this column since 2007.

Exposure to Western culture since 2001 has transformed Afghanistan's previously isolated society, and a love of tattoos has taken hold - despite inking parlours being illegal.

Under the Taliban's tough 1996-2001 regime, personal fashion statements were outlawed and police squads patrolled the streets looking for men who had beards that were too short or hair that was too long.

A Taliban massacre at a school is "Pakistan's 9/11", the country's top foreign policy official told AFP Friday, saying the assault that left 149 dead would change the country's approach to fighting terror.

The historic year 1989 is the year in which the peoples in Central and Eastern Europe took the step towards the free world, Senate Chairman Calin Popescu-Tariceanu told a solemn sitting of the Parliament on Wednesday to mark the 25th anniversary of the December 1989 Revolution that toppled the communist rule.

Pakistan is to end its moratorium on the death penalty in terror-related cases, the prime minister's office announced Dec. 17, a day after Taliban militants killed 141 people in an attack on a school.

The assault on the army-run school in the northwestern city of Peshawar, the deadliest terror attack in Pakistan's history, has triggered widespread revulsion.

A Taliban assault on an army-run school in the Pakistani city of Peshawar on Tuesday has left at least 126 people dead, most of them children, officials say. 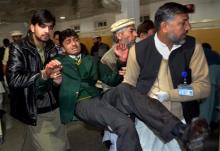 At least 130 people, most of them children, were killed on Tuesday after Taliban gunmen broke into a school in the Pakistani city of Peshawar and opened fire, witnesses said, in the bloodiest massacre the country has seen for years.

The trial of two Golden Dawn members, accused of attacking anti-fascist activists in Piraeus two years ago, was due to begin on Monday but has been postponed until April next year.

The court postponed the trial after deeming that one of the two suspects had not been summoned properly. The other is already in pretrial custody as part of the main judicial probe into the neo-Nazi party. 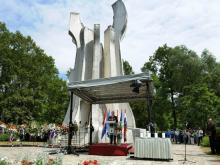