Experts, including professional industrial climbers, are conducting a difficult and painstaking work in a new round of renovation at the Sümela Monastery in the Black Sea province of Trabzon.

The Sümela Monastery stands carved into the steep cliffside of the mountain 300 meters above the picturesque Altındere Valley and is one of the most important tourist attractions in Trabzon.

The exterior plaster of the Atatürk Mansion in the northeastern province of Trabzon has been cracked, the paint on the walls swelled, and the marbles darkened despite extensive restoration conducted seven years ago.

The mansion will be refurbished with a restoration project prepared by a commission and approved by the Cultural Heritage Preservation Regional Board.

The Sümela Monastery, the country's one of the most important religious tourism centers, has been closed once again due to the risk of falling rocks from the nearby hill during an ongoing renovation process. 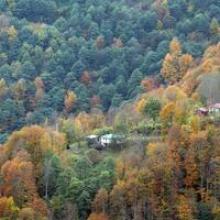 The house of a prominent environmentalist who creates awareness about nature with her critical paintings has been burned down in the Black Sea province of Trabzon just hours before she attended a press conference against cultural fishing, bringing the possibility of attempted arson in mind.

An Orthodox monastery in Turkey's Black Sea province of Trabzon has reopened after restoration works, welcoming visitors once again.

Panagia Keramesta, also known as Kızlar (Girls) Monastery in Turkey, is believed to be constructed during the reign of then-Byzantine Emperor Alexios III. It took its final shape in the 19th century after several renovations over the centuries.

An Orthodox monastery in Turkey's Black Sea province of Trabzon has reopened to visitors after restorations.

Panagia Keramesta, also known as Kızlar (Girls) Monastery in Turkey, is believed to be constructed during the reign of then-Byzantine Emperor Alexios III (1349-1390), and took its final shape in the 19th century after several renovations over the centuries.

An archaeological excavation that will last for five years has been initiated in the northern province of Trabzon. The aim of the work is to unearth the structures and finds belonging to the Roman, Byzantine, Komnenos and Ottoman Empires that ruled in the region throughout history.

Istanbul's Fener Greek Patriarch Bartholomew led a mass at the historic Sümela Monastery in the Black Sea province of Trabzon on Aug. 15.

Only 110 people were allowed to attend the service on the occasion of the Assumption of Mary due to the COVID-19 restrictions.

Gendarmerie units took tight security measures in and around the monastery.

New heavy rainfalls are expected in six northeastern provinces hit by flood last week and a new heat wave will scorch Istanbul and the Marmara region next week, a meteorologist has warned.

"Apart from the eastern part of the Black Sea region, there will be no precipitation across the country," Orhan Şen said on the private broadcaster CNN Türk on July 28.