"When I came to [daily newspaper] Borba in 1990, he was a reporter and political analyst, and known for writing a couple of pamphlets, one of which I remember was about the people from Goli Otok [political prison in Socialist Yugoslavia]," Gunjic recalled.

Accused of participating in the April 11, 1999 murder, the then head of the Belgrade State Security Center (DB), Milan Radonjic, and DB's inspector, Ratko Romic, reiterated at the end of the trial that "they are not guilty and the indictment was mounted to convict the DB."

In another case dating from 1999, Bozur Bisevac, a Serb from Mitrovica, was charged with setting fire to houses, shooting at villagers and forcing them to flee their homes. In August 2000, Bisevac also escaped from jail, but the court continued to try him in absentia.

Curuvija was killed on April 11, 1999, during a NATO bombing of the FRY in front of his home in downtown Belgrade where he lived, that day was Easter according to the Julian calendar.
Four years ago, four members of the then State Security Division were sentenced to execution for liquidation a year ago, totaling 100 years in prison. 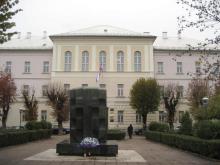 The Croatian Interior Ministry said on Wednesday that a Dutch citizen who was sentenced to 15 years in prison in absentia for war crimes in 1991 has been extradited to Zagreb.

The ministry only gave his initials and year of birth, but local media reported that the man was 53-year-old Milorad Barac.

A German court on July 11 sentenced defendant Beate Zschaepe to life in prison, finding her guilty on 10 counts of murder as part of a neo-Nazi gang and handing her the longest possible sentence.

A Kuwaiti court on April 1 sentenced in absentia a Lebanese man and his Syrian wife to death by hanging over the murder of a Filipina maid, a judicial source said.

The court sitting on the case for siphoning off of more than BGN 2 and a half billion from the Corporate Commercial Bank on 28th of February continues for second day In the Specialised Court. The former banker and majority shareholder of the bank, Tzvetan Vassilev, and other 17 people are defendants in the process, charged as an organised criminal group.

A former CIA agent who was found guilty of kidnapping an Egyptian imam by an Italian court more than a decade ago said on June 29 she intended to return to Italy to face her sentence, but hopes to avoid prison.

A Belgian court on Feb. 13 sentenced a jihadist to 28 years in jail for committing murder in Syria, the Belga news agency said, adding that it was the country's first such conviction.

The 24-year-old man, named Hakim Elouassaki, was a member of Sharia4Belgium, a radical Islamist group based in the northern city of Antwerp.