One of President Tayyip Erdoğan's most important aims in his first official meeting in the White House with U.S. President Donald Trump was to dissuade him from his decision to arm the PYD/YPG and conduct a joint operation with them to seize Raqqa, despite the fact that PYD/YPG is very openly an arm of the outlawed Kurdistan Workers' Party (PKK).

Viewed from outside, the White House meeting between U.S. President Donald Trump and President Recep Tayyip Erdoğan on May 16 took place under the shadow of perhaps one of the most severe crises of recent times in Turkey-U.S. relations.

Turkish President Recep Tayyip Erdoğan and his U.S. counterpart Donald Trump gave strong messages of cooperation against terrorism at a crucial meeting at the White House on May 16, despite continued discord over their respective stances against the People's Protection Units (YPG), a Syrian Kurdish group that Turkey views as a terrorist organization.

President Recep Tayyip Erdoğan has expressed his wish that his upcoming talks with U.S. President Donald Trump will constitute a new beginning in Turkey-U.S. ties, hoping that Washington will reverse its decision to arm Syrian Kurdish groups that Ankara sees as terrorist organizations.

U.S. President Donald Trump's decision to give a green light to liberate the Islamic State of Iraq and the Levant (ISIL) stronghold of Raqqa in cooperation with a Syrian Kurdish militia came as a blow to Turkey-U.S. ties ahead of President Recep Tayyip Erdoğan's visit to the White House next week.

Turkey and the United States have once again come at a crossroads in their troubled-allied relationship. The opposing security perceptions and interests of Ankara and Washington landed the two countries on a very difficult and challenging decision time. The question is indeed rather simple; has the U.S.

Soon after Turkish air force jets carried out a wave of airstrikes against Kurdish targets in northeastern Syria and northwestern Iraq on April 25, Turkish Foreign Minister Mevlut Cavusoglu spoke with US Secretary of State Rex Tillerson over the phone. 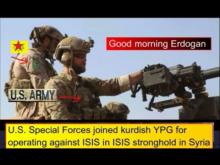 A series of Turkish airstrikes targeting American-allied Kurdish militias in Iraq and Syria threaten to put Turkey and the United States on a “collision course,” experts have warned.