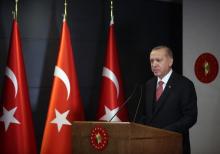 Turkey will start easing coronavirus containment measures as of May 11, President Tayyip Erdoğan said, lifting intercity travel restriction in seven provinces and easing a curfew imposed for senior and youth citizens at the weekend after weeks.

Turkish security forces neutralized at least a dozen YPG/PKK terrorists in northern Syria, near Turkey's southern border, the Defense Ministry said on May 3.

Two Turkish gendarmeries were killed in eastern Turkey in a clash with terrorists, the Interior Ministry said on May 2.

In a statement, the ministry said that four gendarmeries were also injured in the eastern Bitlis province during an anti-terror operation in the region.

The operation is still ongoing, the statement added.

Turkish and European Commission leaders on May 1 held a phone talk to discuss matters of mutual interests, Turkey's Communications Directorate said in a statement.

According to the statement, President Recep Tayyip Erdoğan and European Commission head Ursula von der Leyen discussed cooperation in the fight against the novel coronavirus, bilateral ties, and regional issues.

A PKK terror suspect was detained in connection with the 2011 car bomb attack in the capital Ankara, which claimed 5
lives, police said on May 1.
Identified only by the initials I.A., the suspect was captured from his father's house in eastern Diyarbakır province, the provincial security directorate said in a statement.

Turkey on April 29 slammed a statement by the European External Action Service on the recent terrorist attack by the YPG/PKK in Afrin, northwestern Syria.

Fahrettin Altun, the country's communications director, said on Twitter that the press release by the European Union's diplomatic service shows the union still has not adopted the right stance in the fight against terrorism.