Iraq's Foreign Ministry on April 16 summoned the Turkish ambassador over Ankara's counter-terror operations against the YPG/PKK in northern Iraq.

Iraqi authorities registered their protest over the operation, Fatih Yıldız told Anadolu Agency after the meeting in the capital Baghdad.

A Turkish soldier was killed in a terrorist attack in northern Iraq, the National Defense Ministry said on April 15.

"On April 15, 2020, in the Hakurk region of northern Iraq, a hero fellow soldier was martyred by the explosion of a mine/handmade explosive previously placed by terrorists from the separatist terrorist organization PKK," the ministry said in a statement.

Two armed terrorists were neutralized in Turkey's southeastern province of Şırnak as part of a domestic security operation, the Interior Ministry said on April 15.

Turkey's state Communications Directorate said in a statement that Erdogan "did not find the request [to resign] suitable".

The Turkish intelligence agency and army conducted an operation against five terrorists, who were plotting a bomb attack in Turkey, according to a local governorate on April 11. 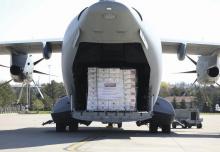 Earlier on April 9, prosecutors in the southeastern province of Diyarbakır issued warrants for six suspects over the attack in Kulp district which claimed the lives of five villagers.

In a Twitter post, the ministry said commando units struck a group of four terrorists who opened harassment fire on security forces in the area, earlier cleared by Turkey's Euphrates Shield Operation.