Former Turkish national team and ex-Barcelona goalkeeper Rüştü Reçber is in hospital after testing positive for coronavirus, his wife said.

Reçber took on hero status in Turkey as he kept goal at the 2002 World Cup, anchoring his team to the semi-finals and ultimately third place, their greatest ever performance in the tournament.

Playing in an empty stadium, Galatasaray was held to a goalless draw by Beşiktaş in the Turkish Süper Lig amid calls for the league to be suspended due to the global pandemic coronavirus.

With the result, Galatasaray extended its unbeaten streak to 10 matches as the defending champion's last league defeat was a 2-1 loss at Göztepe in Week 16.

The home side's Hakan Arslan scored the opening goal in the seventh minute, while Galatasaray responded with Colombian striker Radamel Falcao in the 14th minute and Algerian right winger Sofiane Feghouli in the 37th.

In an away game in week 25 of the Turkish top-tier football league, Galatasaray drew Demir Grup Sivasspor 2-2 on March 8. 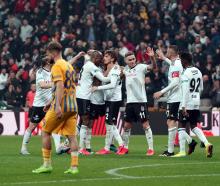 Turkish Süper Lig giants Beşiktaş defeated Ankaragücü 2-1 at the Vodafone Park in Istanbul in the opening match of Week 25 on March 6.

Turkish international striker Burak Yılmaz gave an early lead to his team after he scored a penalty for Black Eagles in the 6th minute of the match. 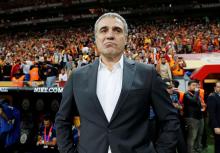 Fenerbahçe said late on March 1 it had parted ways with coach Ersun Yanal by mutual agreement following a string of poor results.

It has been more than 20 years since Galatasaray last saw a derby victory at archrivals Fenerbahçe's stadium.

It ended on Feb. 23 night, Galatasaray won 3-1 after an eventful derby in Turkish Super Lig.

At Fenerbahçe's stadium, Ulker, Fenerbahçe managed to evade Galatasaray's strong start to the match, eventually finding the leading goal after a penalty decision. 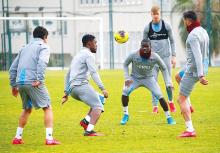 The race for the Turkish Süper Lig trophy enters a crucial weekend as four title hopefuls prepare to clash each other.

Trabzonspor, sitting atop the standings with a game in hand, visits Beşiktaş on Feb. 22, while archrivals Fenerbahçe and Galatasaray clash in a derby game on Istanbul's Asian side on Feb. 23.

Defending Turkish Süper Lig champion Galatasaray has moved a step closer to the top spot in the standings with a 3-0 win over city neighbor Kasımpaşa in a Week 21 game.

Adem Büyük scored a double for the visiting side in the 22nd and 41st minutes in the game on Feb. 9.

Having won its fifth league game in a row, Galatasaray climbed up to the fifth spot with 39 points. 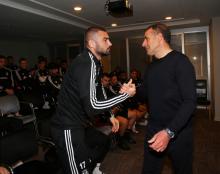 "Our executive board decided to part ways with Beşiktaş coach Abdullah Avcı. We thank him and wish him success in the future," the club said in their official website.