Turkish Cypriot leader, Ersin Tatar, is steadfast in his position regarding a two-state "solution" in Cyprus. As he repeated in his interview with Turkish newspaper Cumhuriyet, in his opinion the only guarantor of the Turkish Cypriots is Turkey.

If the Greek Cypriots had said "yes" to the Annan plan

“It’s obvious that these military activities are being carried out against the Turkish Cypriot people,” it said in a statement

Turkish Cypriot President Ersin Tatar criticized the activities of the Greek Cypriot administration while speaking at an event in Kyrenia on June 19.

"Although Greek Cypriots talk about peace and neighborly relations, they continue their discontent and immoral activities against Türkiye," he said. 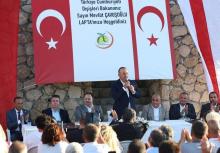 Speaking at a TV interview, two former hitmen of the Greek Cypriot terror organization EOKA have confessed to killing some 68 Turks and "throwing them into a pit" in the 1960s.

"We killed 10 Turks for each lost Greek Cypriot," Neoptolemos Leftis and Athos Petridis, who are in their 80s today, told the Omega TV on May 26. 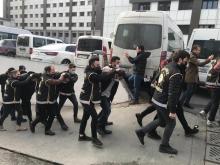 A local court in Istanbul has ruled for the arrest of five suspects, including the leaders of a notorious crime ring, believed to be involved in the assassination of Turkish Cypriot casino-owner Halil Falyalı.

Investigation into the gang-style execution of Turkish Cypriot casino-owner Halil Falyalı, who was gunned down with his driver earlier last week, has been ongoing as a court in Turkish Cyprus ordered the arrest of new suspects.

Five more people have been detained both in Turkey and Turkish Cyprus following the assassination of a casino owner in the northern part of the island.

Halil Falyalı, a Turkish Cypriot businessperson, hotel and casino owner, was shot dead in a drive-by shooting in North Cyprus on Feb. 9.

Falyalı was traveling in a motorcade when unknown gunmen sprayed his car with long-barreled weapons at the entrance to Çatalköy town of Kyrenia (Girne).

Simply put, Erdogan today poses a greater threat to Turkish Cypriots than the irredentist Greek junta did prior to 1974