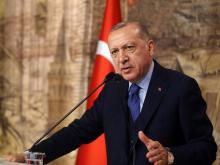 Turkish President Recep Tayyip Erdoğan said on Feb. 29 that he had asked Russian President Vladimir Putin for Russia to step aside in Syria and leave Turkey to deal with Syrian regime forces alone.

Syrian regime's forces, backed by Russian air power, have waged a major assault to capture the northwest province of Idlib, the last remaining territory held by rebels backed by Turkey.

Turkey and Russia have agreed to reduce tensions on the ground in Syria's Idlib province while continuing military action there, the Russian foreign ministry said on Feb. 29 following several days of talks in Ankara.

Turkey and Russia have agreed to reduce tensions on the ground in Syria's Idlib province while continuing military action there, the Russian foreign ministry said on Feb. 29 following several days of talks in Ankara.

The head of the European People's Party, Manfred Weber, on Friday called on Turkey to abide by its agreement with the European Union for stemming migration flows into the block and said that it "will not tolerate illegal border crossings into Europe."

US President Donald Trump, in a call with Turkish President Tayyip Erdogan on Friday, backed de-escalation of violence in northwestern Syria and called on the Syrian government, Russia and Iran to halt their offenses, the White House said.

The presidents of Turkey and Russia spoke by phone Friday to try to defuse tensions that rose significantly in Syria after 33 Turkish troops were killed in a Syrian government airstrike, and a new wave of refugees and migrants headed for the Greek border by land and sea after Turkey said it would no longer hold them back. 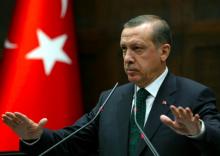 Turkish police, coastguards and border checkpoints have been instructed to stand down in the event of an increase in the flow of refugees to Europe, world news agencies said.

Turkey has decided to no longer stop Syrian refugees from reaching Europe by land and sea. This was reported by TASS and Reuters, citing a senior Turkish official.

Hundreds of migrants walked through northwest Turkey toward its borders with Greece and Bulgaria on Friday, Turkish media reported, after a senior official said Ankara will no longer stop Syrian refugees from reaching Europe.
On Thursday, Turkey said 33 Turkish soldiers were killed in an air strike by Syrian government forces in Syria's northwestern Idlib region on Thursday.

Turkish political parties on Feb. 28 extended condolences to the nation over loss of lives of Turkish soldiers in an airstrike by the Bashar al-Assad regime forces in Idlib, northwestern Syria.

The "murderer regime" in Syria and those who encourage it will pay the heaviest price for their treachery, Turkey's ruling party spokesman said.

"The Syrian army is literally being rescued by aviation - both by their own and Russian aviation. The Syrian Air Force and Russian Air Force planes stop militants day in, day out," Middle East correspondent Evgeny Poddubny said.
According to him, Turkish forces and militants are actively using air defense systems. Russian and Syrian aviation use heat baits for fire protection.