Taxi drivers surround a vehicle during a protest against taxi-hailing apps such as Uber in Athens on Tuesday. They staged a walkout from 8 a.m. to 5 p.m. to protest the government's failure to pass a bill restricting the operation of rival services. During the walkout, taxi drivers stopped several motorists perceived to be offering such services, kicking their cars and threatening them.

Greek train routes were suspended for the day Tuesday as railway workers staged a 24-hour strike to protest the privatization of the rolling stock maintenance company and a lack of staff.

The strike also affected the section of the Athens metro serving the capital city's international airport.

Hundreds of taxi drivers marched in central Athens on Tuesday to protest at what they called an "invasion" by Uber, and attacked passing cars they thought were being used by the ride-hailing service.

Athens will be without taxi services for nine hours on Tuesday as drivers will walk off the job from 8 a.m. to 5 p.m. in protest at what they call unfair competition from Uber ride-hailing services, Ekathimerini reported.

Flying cars may still seem like a gimmick to some but the reality is that company's across the world are working furiously to make them a reality.

Benefits of flying cars would be to reduced commuting times and a way to alleviate some pressure of congestion and traffic jams across busy roads.

Chinese ride-sharing firm Didi Chuxing said on Dec. 21 that it had raised $4 billion from investors, months after a funding round that made it Asia’s most valuable startup, as it presses on with a global battle with U.S. giant Uber.

Transport Minister Christos Spirtzis said on Wednesday that he felt "totally vindicated" regarding his stance on ride-hailing service Uber after the Luxembourg-based European Court of Justice ruled that it should be regulated like a taxi company and not a technology service. 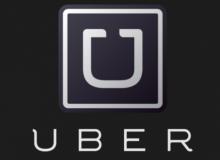 The service that Uber offers is one of the services in the field of transport within the meaning of European Union law, the European Court of Justice has ruled today.

The EU’s top court ruled on Dec. 20 that Uber is an ordinary transportation company instead of an app and should be regulated as such, in a decision that will be closely watched around the world.

Romanian passengers and drivers defended carpooling apps on Wednesday, as the European Court of Justice ruled that Uber is a transport company and must respect European Union legislation in the field.