Unification of Albania and Kosovo

Russia considers the statement of the Albanian Prime Minister Edi Rama on the unification of Albania with Kosovo unacceptable and expects an appropriate reaction from the West on that occasion.
This was stated by the spokesperson of the Russian Ministry of Foreign Affairs, Maria Zakharova.

An online petition calling on the US online streaming platform Netflix to recognise Kosovo as separate from Serbia has received over 23,000 signatures since its launch on Tuesday and caught public attention in the country.

European Union leaders host a summit with six Balkan counterparts on Wednesday. Here are some facts about the six Balkan aspirants:

The European Union agreed in March that Albania, already a member of NATO, can formally start membership negotiations. Once underway, possibly later in 2020, they could still take many years.

A government statement on November 23 said that Prime Minister Ramush Haradinaj had made November 28 a "day of Albanians…to respect historical and cultural values and good family and social traditions." 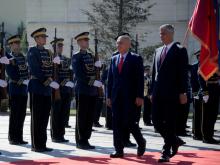 At a meeting with Albania's President, Ilir Meta, on Wednesday in Pristina, Kosovo President Hashim Thaci asked Tirana to offer Kosovo citizens Albanian citizenship, to help them escape their current "isolation" from the European Union.

William Walker with his hands in his pockets conducting a so-called "investigation of the massacre". Walker refused to allow representatives of the Serbian media to be present during his "investigation process" and personally selected the teams of reporters who could accompany him

William Walker, former head of an OSCE mission in Kosovo, says he has come up with a unification project for Albanians - "in Kosovo, Albania, and in diaspora."

The American, who spoke during a ceremony to mark the anniversary of the founding of Ramush Haradinaj's party, noted that he has been coming to Kosovo often since 1999. 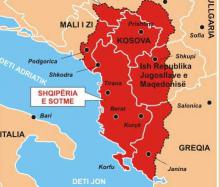 Albanian Prime Minister Edi Rama said an interview with Politico he cannot rule out a union between Albania and the breakaway province of Kosovo – formerly part of Yugoslavia – if the country’s EU membership bid is off the agenda.  Rama added that such an alliance with Kosovo was not his own wish “but a possible alternative to the closed door of the European Union”.

BELGRADE - Albanian PM Edi Rama's statement about a union between Albania and Kosovo confirms once again that creation of a Greater Albania is a common platform of all ethnic Albanians, which is the biggest threat to peace and stability in the Balkans and Europe, Serbian First Deputy PM and FM Ivica Dacic said Tuesday.

PM and President-elect Aleksandar Vucic says the statements regarding a unification of Albania and Kosovo "will remain only in the realm of wishful thinking."