"The public don't want another referendum. What they want and what they demand is that we honour the promise we made tot the voters to respect the first referendum." This was announced by the Prime Minister of Great Britain in his Twitter feed.

Hundreds of thousands of property owners stand to pay five-year fines after legitimizing illegal constructions without declaring the true surface area of their assets.

The United Kingdom's Supreme Court ruled on Sep. 24 that Prime Minister Boris Johnson acted unlawfully when he advised Queen Elizabeth to suspend parliament just weeks before Brexit and that therefore the legislature had not been prorogued.

After an urgent Parliament session, Johson said that "there are no circumstances in which I will ask Brussels to delay. We are leaving on 31 October, no ifs or buts". He called on the MPs not to vote for the delay, AP reported last night.
In a brief TV address, he urged the MPs not to undermine British negotiation position with European Union.

The times have changed and an era has arrived in which even in the oldest parliamentary democracy, Britain, which has an unwritten and inviolable constitution, Prime Minister Boris Johnson, who internationally is said to have the traits of a charlatan, shut down Parliament for five weeks in order on the one hand to avoid being toppled and on the other to use the prospect of a no-deal Brexit as

Overall, 55 per cent of respondents say they are satisfied with the way democracy works in the EU, the highest level since 2004. That is the majority view in all but one member state: Greece. (Others nations on the gloomy end of the spectrum include France and, you guessed it, Britain.)

On April 18, during a riot in Derry, the second city of Northern Ireland, a 29-year-old journalist, Lyra McKee, was shot dead, probably by a paramilitary republican. Her funeral brought together politicians from both sides of the political and religious divide which has caused thousands of violent deaths since 1968. At the front of the congregation were the Irish and British prime ministers. 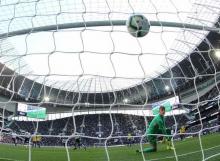 Can British sport, which has benefited massively from the opening of European borders, survive Brexit? Experts say the uncertainty created by Britain's probable EU exit could undermine the multi-billion-dollar Premier League and Formula One.

The situation at the new land registry offices in the inner Athens suburb of Galatsi in recent days is an absolute shame. It is a shambles and once again demonstrates that the Greek state has no respect whatsoever for its citizens and zero interest in dealing with their problems.