The Turkish navy on May 25 started the Sea Wolf 2021 drill in the Aegean and Eastern Mediterranean waters.

In a caption with a video of the drill shared on Twitter, the National Defense Ministry called the Turkish navy "the lightning claw of the waters."

Images were released on Saturday of last week's Hellenic Navy exercise that took place from Tuesday to Friday in the wider sea area of the central and northern Aegean. Frigates, surveillance ships, submarines, helicopters of the navy's aviation force and Hellenic Air Force planes took part in the four-day drill.

U.S. Navy Capt. Brett Crozier departed the USS Theodore Roosevelt aircraft carrier to raucous cheers from his crew after being fired for raising the alarm on the spread of the coronavirus on the ship.

The vast outpouring of support for the dismissed captain was captured on video by those on or near the ship who recorded as the crew yelled his name in between unison claps.

An investigation into the disappearance of a significant amount of military equipment and weapons from a naval base on the southern Aegean island of Leros was gathering pace on Thursday, with the net closing around three suspects, Kathimerini understands.

The United Nations envoy for Syria on Nov. 19 signaled that he was ready to abandon efforts to set up a committee on drafting a post-war constitution if no deal is reached by the end of December.

This U.S. Navy photo obtained June 24 shows the guided-missile cruiser U.S.S. Antietam pulling alongside the Navy's forward-deployed aircraft carrier, U.S.S. Ronald Reagan during a fueling at sea on June 21 in the Philippine Sea. 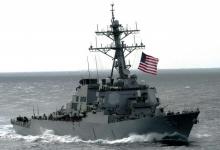 The USS Harry S. Truman aircraft carrier arrived at the US naval base in Souda Bay on Crete on Wednesday in order to refuel and for its crew to rest.

The nuclear-powered Nimitz-class carrier will remain at Souda until May 28.

At 333 meters, it is almost as long as the Empire State Building is tall - a city on the water for its 5,000-member crew.

Aircraft carrier USS Harry S. Truman has arrived at the US naval base in Souda Bay, Crete.

The nuclear-power Nimitz-class carrier, which has been at the center of the US Navy's strikes against the Islamic State, will remain docked in Souda until May 28.

Washington (CNN) - Amid heightened tensions with Russia, the US Navy announced Friday the re-establishment of the US Second Fleet which will be responsible for Naval forces along the East Coast and in the northern Atlantic Ocean.