The unexpected candidacy of the relatively unknown former mayor of South Bend, Indiana, Pete Buttigieg, for the US presidency last April sparked all sorts of debate. It tended not to focus on his positions on the issues concerning America and the world, but rather on his sexual orientation. 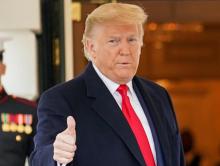 The U.S. Senate voted largely along party lines on Feb. 5 to clear President Donald Trump of the two impeachment articles passed by the House of Representatives in December, ending only the third such trial in American history.

A bitter feud between U.S. President Donald Trump and top Democrat Nancy Pelosi boiled over at his State of the Union speech on Feb. 4, with Trump denying her a handshake and Pelosi ripping apart a copy of his remarks behind his back.

"Big WIN for us in Iowa tonight. Thank you!", Donald Trump wrote on Twitter.
Trump campaign used yesterday's contest to test its organizational strength, deploying Cabinet secretaries, top Republican officials and Trump family members to the state, as AP reports.
It's unusual for Iowa to even be holding a GOP contest with an incumbent in the White House.

Republican Sen. Lamar Alexander of Tennessee will oppose calling more witnesses in President Donald Trump's impeachment trial, all but dashing Democratic efforts to hear more testimony and boosting odds the Senate will vote imminently to acquit without new testimony, in a matter of days.

Democratic presidential candidate billionaire Michael Bloomberg said in an interview with Reuters that he was spending his money to get rid of current US leader Donald Trump.

The top House Democrat did not offer a more concrete timeline but said only that she would do so "when I'm ready."

"And that will probably be soon," she told reporters at the Capitol.
"I'm not withholding them indefinitely."

Bulgaria's defense spending rose significantly in 2019 - by 125%, according to a report released by the information-analytical agency Jane's, world agencies and BTA reported.

Exprets explained that the reason for the rise is the payment for the eight F-16 planes which was made back in August.