Former US President Donald Trump was acquitted by the Senate in his second impeachment trial. Fifty-seven senators voted to uphold the impeachment article submitted by the House, which accused the ex-president of inciting an insurrection in Washington on January 6, 2021, however, 67 votes were required for a conviction, Russian Vedomosti newspaper writes. 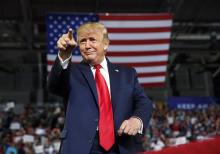 Donald Trump was acquitted on Feb. 13 of inciting the horrific attack on the U.S. Capitol, concluding a historic impeachment trial that spared him the first-ever conviction of a current or former U.S. president but exposed the fragility of America's democratic traditions and left a divided nation to come to terms with the violence sparked by his defeated presidency.

Thus, second initiative of the Democrats for Trump's impeachment failed.
There were 57 senators in favor of recalling Trump, while 43 voted against.
The 57-43 vote in the Senate, however, fell short of the two-thirds majority needed to convict.

Donald Trump's historic second impeachment trial will launch this week with a debate and a vote on whether it's even constitutional to prosecute the former president over the deadly Capitol siege now that he's no longer in office.

William Antholis joins The Greek Current podcast to explore the lessons the US can take from Greece's experience with populism, the US-China relationship and China's foothold in the Mediterranean with its investment in the port of Piraeus, and Biden's foreign policy architecture.

The rural town of Salisbury, Maryland is an unlikely place from which a young man imbued with the high ideals and values of Hellenism would make his way to the world stage. It is in this small town on Maryland's Eastern Shore that on February 3, 1933, Panagiotis Spyros Sarbanes was born, who would in time grow into the legendary Senator Paul S. Sarbanes.

Joe Biden's election as President of the United States has sparked positive reactions across Europe, where both citizens and politicians seem equally relieved by the "changing of the guards" in the White House.

President Biden on Tuesday signed three executive orders on immigration, including one to create a task force to reunify migrants separated under the Trump administration -- part of a sweeping push by Biden to roll back his predecessor's immigration policies.