Prime Minister Kyriakos Mitsotakis said his government's first priority is to "end the unacceptable tax siege" of taxpayers and businesses.

Anti-terror police carried out raids at the addresses of suspects, said sources, who asked not to be named due to restrictions on speaking to the media.

The suspects were in contact with people in conflict zones and were plotting terrorist attacks, according to the police.

The year 2019 marked 400 years since the birth of Francesco Morosini (1619-94), who was elected doge of Venice in 1688, and Maria Georgopoulou, director of the Gennadius Library, and Alexis Malliaris, archivist at the American School of Classical Studies at Athens, have curated an exhibition that showcases several important events in his military and administrative career.

AGERPRES special correspondent Florentina Peia reports: President Klaus Iohannis was welcomed on Tuesday by his Israeli counterpart, Reuven Rivlin, at the official residence of the President of the State of Israel, Beit HaNassi in Jerusalem, on the occasion of the former's visit in Israel. Reuven Rivlin thanked Klaus Iohannis for this visit. "It's my pleasure.

Members of the National Medical Rescue Team departed for Somalia's capital on Jan. 21 to bring those wounded in a suicide car bombing over the weekend back to Turkey.

At least three people were killed and 20 others injured, including several Turkish nationals, when a suicide car bomb targeted a police convoy escorting Turkish contractors in Mogadishu on Jan. 18.

Here's a list of every lunar eclipse coming up over the next 10 years according to NASA.   June 5, 2020 (penumbral) 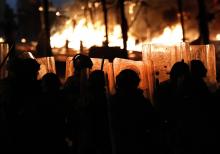 Lebanon's public prosecutor ordered the release on Jan. 19 of more than 30 people detained the previous evening, according to the National State News agency, in the worst day of violence since protests erupted three months ago.

The public prosecutor said all 34 arrested are to be released, except those with other pending cases.

The number of migrants entering Europe from Turkey rose significantly last year as people fleeing strife in Syria and Afghanistan flooded into the country and then set out for Greece, the head of the European Union's border agency said Friday.

A well-known meeting and communication point for hippies during the 60s and 70s, Istanbul's Lale Restaurant is becoming popular again among ex-hippies who visit the place decades later, sometimes to return borrowed items back.

At least 12 people died on Jan. 11 when a boat loaded with asylum-seekers sank in the Ionian Sea, the Greek coastguard said.

"So far 12 bodies have been recovered. The search and rescue operation continues," the coastguard said.