China foisted sanctions on British lawmakers and lobby groups on March 25, widening a chasm between Beijing and Western powers critical of alleged rights violations in Xinjiang.

The EU, U.K., Canada and U.S. sanctioned several members of Xinjiang's political and economic hierarchy this week in a coordinated action over allegations of widespread abuse in the northwestern region. 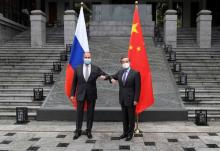 The foreign ministers of China and Russia displayed unity at their meeting Tuesday amid criticism and Western sanctions against them over human rights.

Wang Yi and Sergei Lavrov rejected outside sniping at their authoritarian political systems and said they were working to further global progress on issues from climate change to the coronavirus pandemic.

China on Monday blacklisted 10 EU individuals and four entities in response to Brussels' sanctions against Chinese officials over alleged human rights abuses in the Xinjiang region.

Brussels/Ljubljana – Slovenian Foreign Minister Anže Logar has condemned sanctions imposed by China in retaliation for the EU’s sanctions against it due to its treatment of the Uyghurs in Xinjiang.

China introduced sanctions against EU individuals including a member of Slovenia’s permanent representation to the EU, according to Logar.

Uighurs say new law could bring their ultimate life-threatening nightmare: Deportation back to a country they fled to avoid mass detention

The U.S. Senate passed a bill on May 14 to direct President Donald Trump to sanction officials in China over the country's treatment of the Uyghur community in its northwestern region of Xinjiang.

U.S. Secretary of State Mike Pompeo urged Kazakhstan on Feb. 2 to join Washington in pressing Beijing over its treatment of Muslim minorities, a sensitive matter for the Central Asian nation which has close ties with its neighbor China.

Speaking on a visit to the capital Nur-Sultan, Pompeo said he has raised the matter in talks with Kazakh Foreign Minister Mukhtar Tleuberdi.

"From #Tibet to #Xinjiang, the Chinese Communist Party's repressive campaigns are not about combating terrorism," Pompeo wrote on Twitter. 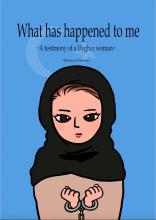 A Japanese artist whose manga comics about a Uighur woman went viral wants to use the simple power of her work to raise awareness of the "daily suffering" endured by the Chinese mostly Muslim minority, she told Reuters.