The Council of Europe's anti-corruption group says the performance of the Former Yugoslav Republic of Macedonia (FYROM) on preventing corruption is "clearly disappointing," and is calling on authorities to take action.

The referendum also concerns confirming an agreement reached between Skopje and Athens to rename the former Yugoslav Republic into "the Republic of North Macedonia."

Macedonia's parliament on Monday set September 30 as the date for a referendum on changing the country's name to the Republic of North Macedonia, a high-stakes vote aimed at resolving a long-running row with Greece and clearing the path to join NATO and the EU.

The parliament of the Former Yugoslav Republic of Macedonia (FYROM) on Monday set Sept. 30 as the date for a referendum on NATO and EU membership bids and on its agreement with Greece on the country's name.

Skopje, 19 July 2018 (MIA) - Parliament at its Thursday's continuation of the 53rd session unanimously adopted the Declaration on supporting Macedonia's accession process for NATO membership. The Declaration was adopted by a vote of 76 in favour without any votes against or abstained. 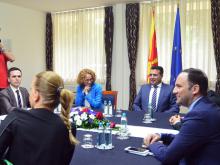 Talks between Macedonia's main ruling Social Democrats, led by Prime Minister Zoran Zaev, and the main opposition VMRO DPMNE party, led by Hristijan Mickovski, failed to clear the path on Thursday towards a referendum on the historic "name" deal with Greece.

The prime minister of the Former Yugoslav Republic of Macedonia has announced the question his country's citizens will face in a referendum this fall on a recent deal with Greece changing the country's name to "North Macedonia."

A meeting of political leaders in Skopje on Wednesday evening to debate the referendum on the name deal with Greece was disrupted when VMRO-DPMNE leader Hristijan Mickoski stormed out, claiming that not all parliamentary parties were represented.

The meeting had been expected to set a date for the referendum, which, according to last month's deal, will be held in the fall.

The conservative main opposition in the Former Yugoslav Republic of Macedonia (FYROM) filed on Thursday treason charges against Prime Minister Zoran Zaev, Foreign Minister Nikola Dimitrov and the Speaker of the House Talat Xhaferi, over the deal the country signed with Greece last month aiming to resolve the decades-old name dispute.

US Vice President Mike Pence will speak on the phone with Prime Minister Alexis Tsipras at 10 p.m. (Greek time) on Thursday, and half an hour later with the Prime Minister of the Former Yugoslav Republic of Macedonia (FYROM) Zoran Zaev, Pence's office announced.