Attempts have been made in Bulgaria for several years to restore the bird population. The killed vulture, named "Ultron", was donated to Bulgaria by a Belgian zoo. After adaptation, the bird was released near Kotel.

Reports emerged from Mesolongi, central Greece, a few days ago of the country's most serious case of vulture poisoning in the last decade, with nine dead birds found so far in the area's lagoon, while two others were transported to hospital in Athens.

Despite rumors and a "bad reputation," vultures play an important role in the environment, said the director of a conservation organization.

A black vulture has been released back to nature after getting weeks of treatment by veterinarians in southeastern Turkey.

Three young Egyptian vultures, raised in zoos in Zlin, Schonbrunn and Jerez, were released to the Eastern Rhodopes on Thursday, the press office of the Bulgarian Society for the Protection of Birds announced.

Vulture marked in Bulgaria became hostage to the Yemeni army. The story begins in the autumn of 2018 when the vulture starts its traditional autumn migration. Flying through Yemen where currently is war conflict happening, though, caught by local people. Once the authorities understand that there is a transmitter, the Griffon Vulture, which is a protected species, is captured. 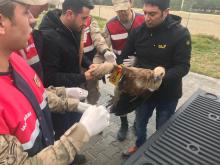 Turkish authorities returned an endangered griffon vulture on April 12 to Serbia after it was found in Turkey.

RIGA, July 25 (Xinhua) -- A young black vulture born and bred at Riga Zoo has been sent this week to Bulgaria where it will be released into the wild as part of a reintroduction program, the zoo informed on Wednesday.

Ostrava, North Moravia, July 24 (CTK) - A young cinereous vulture that hatched in the Ostrava zoo in April has been transferred to Bulgaria this week to be released in the eastern part of the Stara Planina mountain range, zoo spokeswoman Sarka Novakova has told CTK.

The bird will be released in the wild together with other two young cinereous vultures coming from Latvia's Riga Zoo.