According to the agreement, members of this organization accompanied groups of Americans to the entrance to the airport in Kabul in order to be evacuated from Afghanistan, two U.S. officials from the defense sector confirmed for CNN.

President Joe Biden on Aug. 31 mounted a fierce defense of his exit from Afghanistan as the "best decision for America," the day after the U.S. military withdrawal celebrated by the Taliban as a major victory.

Fighting between Afghanistan's resistance forces and the militants of the Taliban radical movement (outlawed in Russia) is raging on in various regions of the Panjshir, Parwan, and Baghlan Provinces, the Ashwaka news agency reported on Wednesday, citing sources. 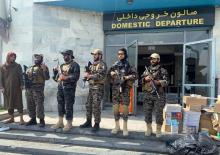 In addition to this photo, which will probably mark history, a picture from February 15, 1989 is being shared en masse on social networks.
It shows General Boris Gromov, Commander of the 40th Army of the USSR, crossing hand in hand with his son over the Friendship Bridge from Afghanistan to Uzbekistan. He was the last Soviet soldier to leave the country.

The hardline Islamist Taliban celebrated their total return to power on Tuesday with gunfire and diplomacy, after the last US troops flew out of Afghanistan to end two decades of war.

The United States' longest military conflict drew to a close on Monday night when its forces abandoned Kabul's airport, where it had overseen a frenzied airlift that saw more than 123,000 people flee.

The last US military flight has left Kabul airport, marking the end of a 20-year presence in Afghanistan and America's longest war.

Officials said the last C17 aircraft took off with the US ambassador onboard after midnight local time on Tuesday.

They added that the diplomatic mission to assist those unable to leave before the deadline would continue.

The NGO activists urged the Montenegrin government to "enable anyone who is on its territory to express their intention and apply for asylum, in accordance with the procedure provided by the [Montenegrin] Law on International and Temporary Protection of Foreign Citizens". 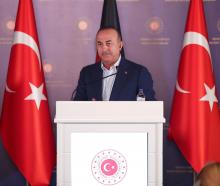 Turkey has warned of a new refugee influx from Afghanistan due to the unsafe environment and called on the international community to act in unity and solidarity in tackling the growing problem that can create global implications, including terrorism.