A request by the Radio and Television Supreme Council (RTÜK) regarding the use of video footages in the coverage of lockdown news on TV channels has stirred a debate. 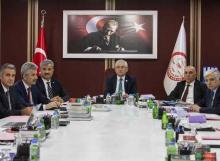 Turkey's election watchdog has announced that all preparations for the March 31 municipal elections have been completed.

Turkey's television watchdog has ordered a halt to a television program on Halk TV for five episodes, while also ruling for a fine, over remarks of two famous actors on the president in a previous episode.

Turkey's top media watchdog has fined the TV series "Koca Koca Yalanlar" due to the way the popular series narrates the story of a man who is cheating on his wife.

The Athens Urban Transport Organization (OASA) says that a hold-up at Greece's privacy watchdog is preventing it from rolling out a much-publicized electronic ticketing system, which aims to limit fare dodging in the capital.

The competition watchdog of Bulgaria has given the green light for a Dubai-registered offshore company to acquire consumer electronics retailer Technomarket.

Bulgaria's competition watchdog has fined pay-TV services provider Bulsatcom for its failure to provide customers with exact information on a new promo package it is offering.

Car-hiring service Uber has started a petition calling on users to stand up for its right to remain active in the Bulgarian market, its website shows.

It explains[BG] the petition could send a strong message to the government demanding that it that citizens say "yes" to innovations, new regulations, and the right to choose.

Greece’s Council of State, the country’s highest administrative court, on Monday published a decision that maintains a fine against an Athens television station for its raunchy prime-time weather reports by a scantily clad presenter.

The original fine was levied by the board of the National Council for Radio-Television, an independent broadcast watchdog agency, known as ESR.