Wave of violence in Israeli-Palestinian conflict

14 people, most of them Israeli soldiers, were injured in a car bomb attack in Jerusalem, the French press reported, citing Israeli authorities. The attack was carried out in a lively area with many bars and restaurants.

At least 12 Israeli soldiers were injured in a car-ramming attack in Western Jerusalem on Feb. 6 morning, Israeli army said.

In a statement, the Israel Defence Forces said a "Palestinian" rammed his car into a group of IDF soldiers in Jerusalem.

One young schoolgirl was killed and at least 12 others were injured in a stabbing at a bus stop just outside the Japanese capital, Tokyo, on May 28, national broadcaster NHK cited police as saying. 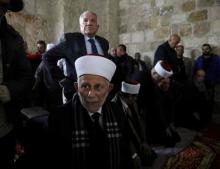 A Palestinian man argues with an Israeli border guard outside the house of man accused of the fatal September stabbing of an Israeli-American, after it was partially demolished by Israeli forces on Jan. 18 in village of Yatta in the occupied West Bank south of Hebron. (Photo by Hazem Bader / AFP)

Seven people including two British tourists were wounded in Paris late Sunday by a knife-wielding man, a terrifying attack that bystanders tried to stop by throwing petanque balls at the assailant.