“More than a thousand such incidents occur every year, and most of them are not reported”

The Turkish State Meteorological Service has issued a warning for heavy rains expected in the metropolis of Istanbul and 21 provinces on July 9. Following the warning, heavy rainfall has started to take affect in Istanbul and other provinces at midnight.

Today, temperatures will drop by 5-7° Celsius. Cumulus and cumulus-rain clouds will develop over the country. Significant precipitation is also expected. 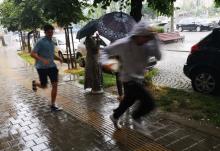 A heavy storm in the capital this morning flooded the underpasses in the center.

Shortly before 9 o'clock the sky darkened and torrential rains began. A yellow code has been announced for Sofia city due to heavy rains and thunderstorms today. The amount of precipitation that is expected to fall is up to 20 liters/sq.m. There are also conditions for hail.

Rainfall and thunderstorms will occur today mainly in the eastern parts of the country. In some places the precipitation will be intense and significant in quantity, accompanied by a temporary increase in wind. There are conditions for hail.

Heavy rains and thunderstorms have affected most of Greece

During the next 24 hours, a precipitation situation will be created under the influence of a Mediterranean cyclone passing south of the country. Heavy cumulonimbus clouds will develop and there will be thunderstorms, significant rainfall and local hail.

Murska Sobota/Rogatec – Storms that raged in parts of eastern and north-eastern Slovenia on Wednesday afternoon have caused significant damage, especially in the Pomurje region and the small town of Rogatec that were hit by egg-sized hail.

Turkey's eastern provinces have been hit by heavy snowfalls in the middle of April, with the snow depth reaching some 20 centimeters in the center of Kars, a province bordering Armenia.

"People swim at the Aegean coasts, we are shoveling snow here in April," Güven Öztürk, a resident of Kars, told Demirören News Agency on April 13.

Scientists have long been warning that extreme weather would cause calamity in the future. But in South America, which in just the last month has had deadly landslides in Brazil, wildfire in Argentine wetlands and flooding in the Amazon so severe it ruined harvests, that future is already here.