Russia has not sent military personnel to Libya and the Russian upper house of parliament has not received a request to approve such a dispatch, Interfax on May 27 cited Vladimir Dzhabarov, first deputy head of the upper house's international affairs committee, as saying.

Russia has recently deployed fighter aircraft to Libya to support Russian mercenaries who are battling for warlord Khalifa Haftar, said U.S. military leaders on May 26.

Russia recently sent fighter jets to Libya to support Russian mercenaries fighting for strongman Khalifa Haftar in the long-running conflict, the U.S. military said on May 26.

Forces backing Libya's U.N.-recognised government said on May 25 that hundreds of Russian mercenaries fighting for rival military commander Khalifa Haftar had been evacuated from combat zones south of the capital Tripoli.

Hundreds of Russian mercenaries fighting for Libyan strongman Khalifa Haftar against the internationally recognized government were evacuated from combat zones south of the capital Tripoli, according to various reports.

The reports come after a series of setbacks for Haftar's year-long offensive to seize the capital from the Tripoli-based Government of National Accord (GNA).

Senior Turkish and American officials have discussed attacks by the General Khalifa Haftar forces that have been escalating recently against the internationally recognized Government of National Accord (GNA) based in Tripoli, Ankara said in a statement.

Turkey warned on Thursday against any attacks on its interests in Libya by Khalifa Haftar's forces after his Libyan National Army (LNA) threatened to respond to recent military setbacks by striking Turkish positions in the country.

"In the event Turkish interests in Libya are targeted, this will have very grave consequences," said Turkish Foreign Ministry spokesman Hami Aksoy.

The spokesman for Libyan warlord Khalifa Haftar's forces announced early on May 20 that as of midnight they would be withdrawing 2-3 kilometers (around 1.8 miles) from fronts south of Tripoli.

Ahmed Al-Mismari said on social media they will be pulling back so people in the capital can celebrate the Muslim Eid al-Fitr holiday, which marks the end of the holy fasting month of Ramadan. 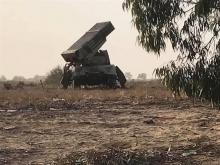 Libya's army on May 18 retook Al-Watiya airbase occupied by warlord Khalifa Haftar's militias, a key airbase now back under government control after some six years under putschist forces.

The victory was announced by the media office of the government-led Burkan Al-Ghadab (Volcano of Rage) Operation, citing Osama al-Juwaili, the commander of Operation Peace Storm.