Turkey will consider elements of Libyan warlord Khalifa Haftar as a legitimate target if the country's interests in Libya are targeted, the Turkish Foreign Ministry said on May 10.

Attacks by renegade commander Khalifa Haftar's forces left the Libyan government "no choice but to respond," according to a statement from by the prime ministry's press office.

Prime Minister Fayez al-Sarraj criticized the international community for staying silent in the face of the attacks.

Libya-based Gen. Khalifa Haftar announced a truce upon the "command of Russia" as he suffered great losses against the U.N.-recognized Libyan government, according to pro-Haftar parliament speaker.

The U.N.-recognized Government of National Accord (GNA) in Libya on April 30 said it rejected the unilateral truce call made by its arch-enemy, renegade commander Khalifa Haftar -- the warlord of the armed forces based in the east.

Forces loyal to Libya's renegade commander Khalifa Haftar on April 30 announced a unilateral ceasefire during the holy month of Ramadan.

Ahmed Al-Mismari, a spokesperson for the Libyan National Army (LNA), said all military operations have been paused during the Muslim fasting month.

Two civilians were killed late on April 12 in attacks on civilian settlements in the south of Libya's capital by militias loyal to warlord Khalifa Haftar.

In Sidi Selim, a woman was killed by a rocket attack, said the Abu Selim Municipality in Tripoli. 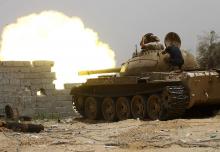