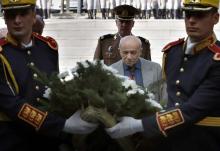 The Romanian military prosecution office has opened a criminal case after more human remains were discovered near a mass grave found in 2010 close to the city of Iasi.

The remains were found on June 29 by experts working for Romania's Elie Wiesel National Institute for the Study of the Holocaust near Popricani, a small municipality close to Iasi.

The National News Agency AGERPRES concluded on Wednesday a partnership agreement with the Elie Wiesel National Institute for the Study of the Holocaust in Romania and the United States Holocaust Memorial Museum (USHMM) in order to establish, implement and disseminate information and activities dedicated to history and understanding of the Holocaust.