The former Croatian tennis player has been the coach of Novak Djokovic for almost a year.
He says the collaboration is phenomenal.

Grigor Dimitrov's victory over Roger Federer in the US open quarterfinal clash with a 0-7 record against 19-time major champion had surprised many, maybe himself as well, as nothing indicated something like that could have happened.

Serbian player had managed to win after all and to secure his third-round match on Friday against either American Denis Kudla or Serbian Dusan Lajovic.

Novak Djokovic and Roger Federer made history Sunday by playing the first-ever fifth-set tiebreak at 12-all in the Wimbledon final, writes Forbes.

In the longest Wimbledon men's final in history, Djokovic captured his fifth Wimbledon title, his second straight and his 16th Grand Slam crown when Federer shanked a forehand on match point after nearly five hours.

World No. 1 Novak Djokovic will fight for his fifth title in London, in his sixth Wimbledon final.
The defending champion hadn't show brilliant performance against the persistent Spaniard, playing rather poor at the moments, but in the end, he managed to break No. 22 seed Bautista Agut. 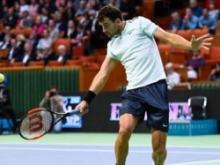 Bulgaria's best tennis player, Grigor Dimitrov, gave an interview to the Spanish newspaper AS, he talks about what tournament dreams of winning and what he thinks about tennis stars Roger Federer, Rafael Nadal and Novak Djokovic.

Novak is the first player in history to complete career "Golden Masters", a success no player managed to achieve since the current system was established by ATP in 1990.

Both players were coming off grueling five-set semifinals, but this matchup was a tidy affair, with No. 12 Djokovic wrapping up the title in just over 2 hours, 15 minutes.

Grigor Dimitrov dropped in the second round of the ATP500 series tournament in Queens after being eliminated in two sets by Novak Djokovic - 4:6, 1:6. After many mistakes the Bulgarian lost the match for only 67 minutes.