A fox in the historical Gallipoli Peninsula, where the Dardanelles Wars took place, became a social media sensation in Turkey as it has hundreds of its photos shared online.

The fox was first seen in the peninsula in 2017 and has been friendly towards people since they began feeding it.

The lockdown restrictions in place combined with the Christmas break offer a rare opportunity for some reading. I recently finished a great book on the Yalta Conference before picking up a biography of Franklin D. Roosevelt.

Turkey's president on March 17 marked 105th anniversary of Çanakkale Victory and Martyrs' Day and remembered the fallen soldiers who lost their lives during naval and ground battles in Çanakkale (Gallipoli Campaign) during the World War I. 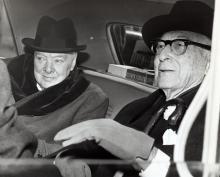 A partially smoked cigar, which was left by former British Prime Minister Winston Churchill at the Coliseum London on January 30, 1953, will be offered for sale for 6,000 pounds at auction at Hansons Auctioneers in Derbyshire, TASS reported.

But since Orban's ruling Fidesz party returned to power in 2010, it has become the must-attend event for right-wing Hungarian intelligentsia loyal to Fidesz.

It was a speech in 2014 that made the biggest waves internationally as Orban set out a vision for an "illiberal state" that became a template for nationalist-populists everywhere.

The first Greek-British Symposium, at Nafplio last year, inaugurated a high-level dialogue between politicians, businesspeople, academics and other specialists. The aim was to improve ties that were already good and to look for new ways of cooperating in the challenging international environment.

Greece could have become a communist country in 1947 and stayed that way until at least 1989, even though many believe that on October 9, 1944, at the Moscow Conference, Winston Churchill gave Joseph Stalin a napkin saying that Great Britain wanted 90 percent of Greece and we all - including the Americans - lived happily ever after.

The auction was organized by Sotheby's auction house and held on Tuesday in London. The painting "Lake of Goldfish in Chartwell", created by Churchill in 1962, three years before his death, was estimated at 50-80 thousand pounds ($ 66-105 thousand).

The reason for this has not been officially announced, Tanjug reported on Thursday.

Sources at the Ministry of Foreign Affairs "interpreted" the decree as "a part of standard procedures, as Pribicevic's mandate is expiring this year."