After the rape, the police sent him to the capital Pristina, where his ordeal continued. "Then I was seriously abused again, beaten up… I was praying to be killed rather than endure what was happening to me."

Residents living near the Nilüfer Lake, a natural wonder lake surrounded by lotus flowers in the southeastern province of Kahramanmaraş, have urged authorities to take the lake under protection.

But eight years is more than many convicted rapists are jailed for in the Balkan country, where, according to a BIRN investigation of data for the last five years, half were sentenced to five years or less, five years being the minimum sentence under the law since 2017.

Lecic was summoned to the police to give a statement on accusations of rape dating to 2012. He spent several hours in the police station on Friday.

Women across Mexico took to the streets on March 8 to protest the crisis of violence they face on a daily basis, fueled by what they say is an out of touch government, and President Andres Manuel Lopez Obrador's support for a politician accused of rape.

A female protester holding a feminist flag  on International Day for the Elimination of Violence Against Women in Istanbul, March 6 2021. Photo: EPA-EFE/SEDAT SUNA

Turkish women have been holding protests and marches since Friday, and nine women were detained by police for carrying LGBTI flags at a protest in Istanbul's Kadikoy Pier Square. 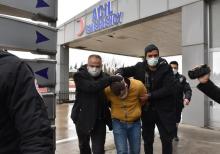 A woman was filmed being beaten up on the street by a man before the eyes of her child on March 6, as the video went viral on Turkish social media, with users calling out the issue which has failed to come to an end in the country where femicide are also rift.

A new social solidarity movement has been launched for women who are subjected to domestic violence and have limited access to technological devices.

The motto of the campaign, initiated by Teknosa, the Sabancı Foundation and the Federation of Women's Associations (TKDF), is "technology for women, solidarity for all."