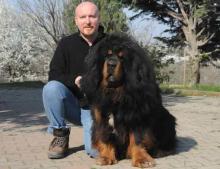 Evsin Şentürk, who is breeding Tibetan Mastiff, a huge and strong dog species, in the northwestern province of Bursa, began selling the dogs in the Association of Eurasia Tibetan Mastiff Species, which he has founded.

An Italian regional councilor has called for using Turkey's giant Kangal shepherd dogs to protect flocks of sheep from the increasing number of wolves in Tuscany.

Some of the best herd-protecting animals in the world, Turkey's giant Kangal breed dogs have been protecting the cattle in farms across the United States for years.

A search-and-rescue dog named Şans (Luck), which has been a member of the İzmir Municipality Fire Department for 11 years, taking part in many missions including after the Van earthquake and the Soma mine disaster, has died.

The Greek land army honoured a Belgian Sheppard dog (Mallinois) for its outstanding contribution to the army as an ancestral military dog. The award took place at the 3rd Veterinary Hospital within the framework of the Graduation ceremony of the Military Dog Training School. The dog is 8 years old and entered service as a breeding dog. The Mallinios bore 43 top military dogs.

Born sometime in 1943, Smoky, a Yorkshire Terrier, was a famous female war dog who served in World War II. She weighed only 4 pounds (1.8 kg) and stood 7 inches (18 cm) tall. Smoky is credited with beginning a renewal of interest in the once obscure Yorkshire Terrier breed.

Şenol Özbakan, a former ship skipper who lives in a minibus with 12 abandoned golden retriever and Rottweiler dogs that he adopted in the western province of Muğla's Bodrum district, has been hospitalized.

Özbakan and his dogs, nicknamed the "Golden Gang," have thousands of followers from Turkey and all over the world on social media.

Three Belgian Malionois joined the Russian armed forces last week. Security forces, both police and army have long been using canines in missions. But what makes these puppies special is the fact that they are cloned! The Belgian Malinois were created from best South Korean sniffer dogs, cloned to maximise unique abilities working for police or security service.