Eight women and children from a Central American caravan entered U.S. territory to seek asylum on April 30, sparking celebrations among companions after a month-long trail across Mexico that led President Donald Trump to demand changes in the law. 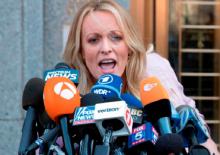 Daniels already was suing Trump seeking to void a nondisclosure agreement she signed that barred her from talking about what she said was an affair with the president in 2006.

Excessive political correctness simply gives extreme forces and the preachers of populist fearmongering more voters and fans. This was illustrated quite clearly in the election of Donald Trump to the US presidency. Middle and working-class Americans were scared for their jobs and over whether they would be able to afford their children's tuition fees at the country's overpriced colleges.

Turkey on April 25 rejected United States President Donald Trump's "inaccurate expressions and the subjective interpretation of history" regarding the 1915 events, according to a statement by the Foreign Ministry.

Workers everywhere fear lost jobs and wages. Citizens fear new faces crossing borders, and terrorists and criminals who kill for reasons no one can understand. They fear that government cannot or will not protect them.

The Trump administration warned Turkey on April 18 that it is considering punitive "consequences" if the NATO ally does not throw out the charges or acquit an American pastor accused of espionage and aiding terrorist groups.

The White House says President Donald Trump still wants U.S. troops to exit Syria as soon as possible, after the French president said he persuaded Trump to stay in Syria and launch airstrikes as punishment for an alleged chemical-weapons attack.

President Donald Trump's pick to become Washington's top diplomat has pledged to work with U.S. allies to strengthen the Iran deal and played down fears he is bent on regime change in North Korea.

United States President Donald Trump has yet to make a final decision on a potential military strike on Syria in the wake of a suspected chemical attack that killed dozens of people.