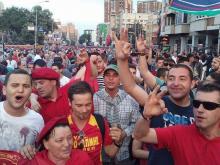 Thousands of supporters of the ruling VMRO DPMNE party rallied in front of parliament to hear a defiant speech from the Prime Minister, Nikola Gruevski.

The rally held under the motto "For a Strong Macedonia" aimed to show that many people still back Gruevski amid growing calls for his resignation. 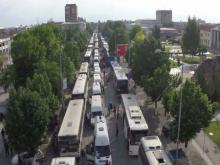 A rally in support of embattled Macedonian Prime Minister Nikola Gruevski started in Skopje on Monday evening - a day after a protest march organized by the opoposition nearby demanded his resignation.

The second meeting of the leaders of Macedonia's four biggest political parties aimed at resolving the political crisis in the country ended inconclusively on Monday, telma.mk reported.

The leaders agreed to meet again on 26 May.

The leaders of Macedonia's four biggest political parties met on Monday in a fresh attempt to ease tensions and find a way for resolving the months-long political crisis.

Leaders of the four major parties in Macedonia are set to meet Monday in a renewed attempt at solving the political crisis in the country. 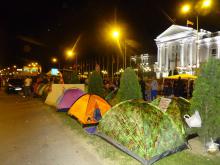 The protesters said they would not leave the tent camp until the resignation of Prime Minister Nikola Gruevski, who they blame for installing an authoritarian regime in Macedonia, even though the premier's allies plan to stage a counter-demonstration on Monday.

The Macedonian governing party VMRO-DPMNE is set on organizing a counter-protest at 8 pm in front of the Parliament building. The organizers claim that Macedonia is currently facing '' a directed attack aiming at destabilization'' of the country.

A video recording purportedly showing Macedonian opposition Social Democrat leader Zoran Zaev arranging for receiving a bribe of EUR 200,000 in his capacity of Mayor of Strumica has been published online, independent .mk has reported.

Thousands of protestors demanded the resignation of Macedonia's Prime Minister Nikola Gruevski and his cabinet on Sunday.

Thousands of people have arrived in Skopje to join the protest rally called by the Macedonian opposition on Sunday with demands for the resignation of Prime Minister Nikola Gruevsku.

The protest action in front of the government headquarters, led by opposition Social Democrats (SDSM) of Zoran Zaev, is backed by several civil organizations.