According to the sources of the radio station, the positions of the groups connected with the Palestinian resistance units near the cities of Khan Yunis and Gaza were shot at, and there is still no information about the victims or damage, TASS reported.
Palestinian groups returned fire on Israeli planes, Sawt al-Aqsa added.

As stated, the air defense intercepted one of the missiles, and the other fell on the open area. There were no reports of injuries or damage.
Rocket fire from Lebanon is the first such cross-border incident since May when Palestinian extremists fired rockets at Israel during the 11-day war between the Israeli military and extremists Hamas, which rules in the Gaza Strip. 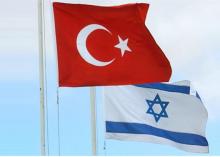 Turkey and Israel have agreed to work towards improving their strained relations after a rare phone call between their presidents, a spokesman for Turkey's ruling AKP said on July 14.

This is the second violation of the otherwise fragile truce reached on May 21, after 11 days of fierce clashes between Israeli and Palestinian forces.
And this attack, as it was announced from the Israeli side, followed after the new "balloon bombs" launched from the Palestinian side causing eight fires in the south of Israel.

Israeli warplanes carried out airstrikes early on June 16 on positions in the Gaza Strip belonging to the Palestinian resistance group Hamas.

The Israeli army said in a statement that it targeted Hamas compounds, including in the al-Yarmouk area east of Khan Younis city.

It also bombed a position in the Zeitoun neighborhood.

The Israeli side claims that the attacks are a response to flammable balloons, better known as "balloon bombs", launched from Palestinian territory, the BBC reports, adding that the initial trigger for the bombing was a gathering of Jewish ultra-rightists allowed by the new Israeli government.

Israel says it has carried out air strikes against Hamas militant targets in Gaza, in retaliation for incendiary balloons launched from the territory.

Explosions were heard in Gaza City in the early hours of Wednesday.

Several balloons were sent from Gaza into Israel earlier on Tuesday causing multiple fires, according to the Israeli fire service.

European Council President Charles Michel said on June 2 that the European Union welcomed the ongoing dialogue process between the governments of Egypt and Turkey.

He was summoned after he caused dissatisfaction among Palestinians with comments that were estimated to favor Israel.

With help from Egypt and Ukraine, Moldovan authorities evacuated 13 Moldovan citizens, including children, from the Gaza Strip, who arrived back on Thursday following the recent military conflict between Hamas and Israeli forces, which destroyed much of the Gaza Strip.