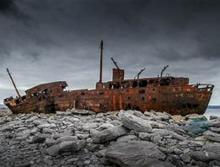 A Dutch company, which was involved in salvaging the Kursk submarine, is drawing up a plan to retrieve the Vera Su ship, which is stranded in the Yaylata area on Bulgaria's northern Black Sea coast. This was announced at a briefing by Bulgaria's Minister of Transport Hristo Alexiev, who arrived at the scene of the incident.

The town of Panagyurishte (Pazardzhik district) has met the high criteria to be a European City of Sports in 2022 and has received the prestigious title. This became clear today after an inspection by the non-profit association ACES Europe.